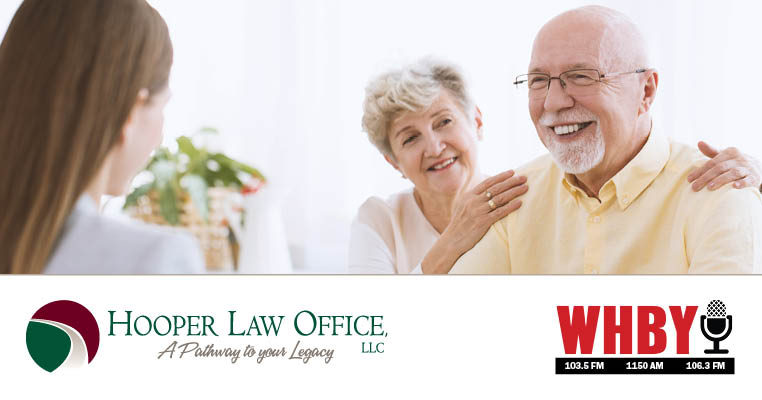 Why Do People Work with an Elder Law or Estate Planning Attorney?

Listen to "Hooper Law Office: Why Do People Work with an Elder Law or Estate Planning Attorney?" on Spreaker.

Josh: We welcome now back into the Miron Construction Studio our friends Peter Harbach and Sarah Kons from Hooper Law Office. Sarah, Peter, welcome back to the show. Thanks for coming back you guys and thanks for everything, today, the three-year anniversary of Fresh Take today. So very excited about that and very thankful to Hooper Law Office for making that possible they have been great supporters and partners of the show for a long, long time. Really appreciative of that and thanks for being part of us here monthly. When you get to come in to chat, I really like it.

Josh: Thank you so much. I really appreciate it. Couldn't do without you and it's been a really great partnership. So, I want to start here, I want to ask you what usually brings people to your office in the first place. How does it how do these conversations usually start? Is there a life event? Is there something in the news? What often will get people in that door for that first conversation?

Sarah: There's usually one of three things. Either it is the decline of health of a loved one so they're coming in because there's something happening to somebody else. They've hit retirement. So retirement tends to mean I've got this list of things that I need to do, and dealing with planning my estate is one of those things. The third, and probably the most common one is people come in and say I just had to deal with my parents or my brother or whoever's estate. I don't want to do this to my family because it was very difficult. I want to make it as easy as possible.

Josh: So there could be sort of that acute need, somebody's condition changes. There could be the circumstance changing like retirement where you're like ok now is the time I'm going to start thinking about this or that last scenario and I'm not surprised that that's the most common is they've had to deal with someone else's vision lack of a plan or not outstanding planning and they don't want to do that same thing. They don't want to be in that same situation.

Sarah: Exactly. And it happens pretty commonly and it's funny because the people said exactly what they say. I don't want to do this to, usually, my kids.

Josh: That's it, they don't want to put someone else in the situation. They just had to go through. So, do you find yourselves having to do some handholding and maybe some encouraging, saying "it's OK we're going to be able to do this"? Is there some panic usually when people come in? Is there a concern of that level?

Sarah: Not really. Usually, the panic is more in people that are dealing with the decline of health in other people. When people are being proactive it's almost a proactive interaction for them because it's "I want to be able to do this. This is a good thing that I'm doing in taking care of the people that I love and making things easier for them." So they leave the experience feeling very positive about what they're doing and like it's a good investment.

Peter: So we always block a two-hour period of time and a lot of people are surprised thinking "oh you know my situation this is simple, so I don't know in the world we are going to get through a couple of hours and do anything productive" And every time by the end of it they say "oh my god, there is so much more to this than what I expected. You brought up so many things that I didn't think of." But that's our job. If somebody can think of all of these things on their own, we wouldn't be necessary.

Josh: Well that's really the point here and that's what we're getting into today. There are so many things even when something happens to bring the notion of estate planning front and center in their life whatever that might be, there's a lot of things that we're not thinking about in that process. [...] What are some of those things that people aren't thinking about?

Peter: Well, you know, a lot of people will come in thinking "oh, you know I need to get a Will" or "It's been a lot of years since I've done a Will". [...] One of the first things is always, what if you don't die but you just need help? What if you're not in a position to be able to handle your financial assets and everything. Who do you Trust? Who are we gonna put in charge of your financial decisions and your health care decisions, to make sure that you've got a team built around you so that if you do decline, you've got people who are on deck who have the powers and provisions that they need to be able to do the best job in helping you.

Peter: Yes, absolutely. Because one of the most overlooked things and we harp on this all the time, is that if you have any concerns about the costs of long term care there's provisions you could put within your estate plan that gives the family different powers to help you through that if suddenly you're facing long term care costs. And look, those could be very valuable [...] including setting assets aside to make sure that somebody does not completely run out of funds. But, they only have that power if it's explicitly within their Estate Plan.

Josh: That's right. That's where that proactive action is so important. What are some of the other things people are overlooking or not thinking about in the beginning stages, Sarah?

Sarah: Well, you know it's funny when I have a conversation with people, it's very common that they're immediately flipping to the financials. They want it while "everything's going to be really easy, I have everything at this bank and this advisor," and they're immediately talking about money but it's the people that are in your life that you end up planning around. The money is absolutely important and the property and everything else and there are legacy aspects to different things.

Sarah: And the financial side of it makes your estate plan work, but you're building it for people usually. You want to have the individuals in different roles and responsibilities, you want to make sure that you're including people that maybe aren't legal heirs of yours, or you have a different definition of family. So I mean, there are all sorts of examples of famous people that have passed away and they've lost contact with maybe their blood relatives. But the people that have surrounded them during their life and supported them are now completely left out because there was no estate plan. So it's kind of the same with people, it's the individuals in your life that you're fighting for.

Josh: I remember this from the process I went through in getting my plan in order. II was thinking too, "OK, I better have all my money my statements and forms and all these things." But that's later because in order to know what to do with those assets you need to know who I care about, what I want to accomplish, who I'm responsible for. Those big questions about the relationships. It's in my life. And, it's important now might seem easy. But, it's not always as easy as we think, is it? Those relationships are complex.

Sarah: Exactly. And they go through changes.

Josh: Yes, that's the big one. So, talk a little bit about that. What are some of the changes people maybe not thinking about up front? Or, some of the specific circumstances that present challenges later.

Sarah: A lot of times we're talking about the people that they want to include. Do they have concerns about money management? Do they have someone that has a substance abuse issue in their family that they want to support health wise but not make things available for drugs or alcohol? Is it a relationship issue with one of the individuals, some potential divorce or something like that? Are there stepchildren that you consider to be children or grandchildren but wouldn't be included unless you specify it? So there can be a lot of different examples of what's happening with the different individuals. And then there's also kind of the proactive side of it as well. So making sure that when you're laying out your plan you have the roles and responsibilities specified. Peter was talking about making sure that different people have the authority to help you. Well, what about you helping other people? I talk all the time with clients that have kids that are between ages of 18 and 30. They're they're adults. They're legal adults but usually between especially 18 and 25 maybe they're not real adults yet.

Josh: Less and less each year. But this is important because you are deciding who's going to be responsible for your decision making and your finances. These are big decisions, and you want to make sure that you understand the options that you have. I think this is the most important part, there is not one tool. There are many, many, many tools. I know in our process, Sarah, my big one was my dog. I don't know if Leroy's going to be around longer than me. And I want to make sure he's cared for as long as he is around. So, we created a special pet trust that put some money aside, specifically for his needs, designated a series of people in order that are going to be responsible for that. And now I have total peace of mind that if I'm not here to pick care of him, someone is.

Sarah: Well, and he had particular health issues that were a bit more expensive. So, sometimes when you're designating an animal with someone they're a great caretaker but they wouldn't have the resources to support an animal. So that's where that, in particular, would be helpful.

Peter: People make fun of the concept the pet trusts because they think of some eccentric old lady that leaves a million dollar to a couple of cats. But in reality, it's just allocating money so that you're certain that there is something there to provide for the manner of living for the pet so that they're taken care of and not you know dumped off of an animal shelter for lack of funds.

Sarah: This is particularly true. Yes, dogs and cats. But any exotic pets that do have special demands or needs... like horses.

Josh: Oh gosh, talk about the costs related there. I mean you're talking about a really big obligation. You don't want to just foist that on someone without appropriate resources go with it.

Sarah: And I do a lot of special needs planning and it's not unusual for there to be therapy animals. Horses are very common therapy animals, so making sure those are available for those people.

Josh: And if you want it to happen, when you're not here, it's got to be in the plan. And so, you've got to talk about it. You have to plan for it. And I highly recommend you talk to Peter and Sarah about it because they know the questions to ask. They understand the tools that are available.

Josh: Peter Sarah thanks so much. Always a pleasure.

Thank you for preparing my trust. For ensuring my assets are secured. All my questions were answered. We look forward to working with you in the future.