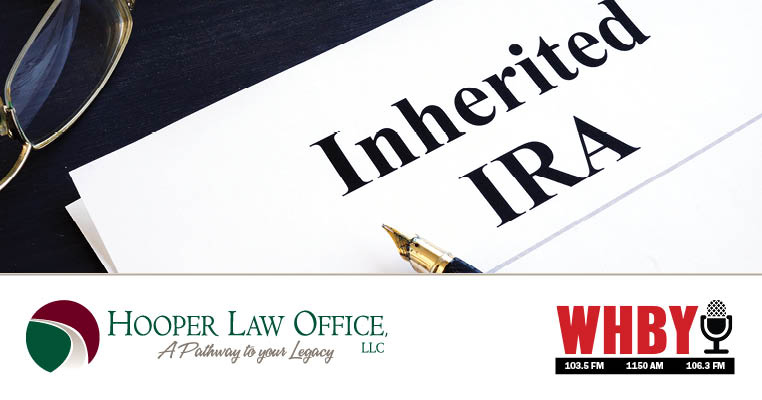 How Will the Secure Act Impact Your IRAs and Estate Plan?

Listen to "Hooper Law Office: How Will the Secure Act Impact Your IRAs and Estate Plan?" on Spreaker.

The Secure Act was signed into law on December 20, 2019. This new law will impact retirement accounts, as well as Estate Planning. Attorney Peter B. Harbach joined Fresh Take's Josh Dukelow in-studio at WHBY to share what people need to know about their Estate Plan and the SECURE Act.

Josh: And in your profession, that's what it's all about [...] keeping up with these changes. Last year, we talked with Sarah about the SECURE act. This was a package of legislation, changing some of the rules around retirement accounts and the absorbing of that money and passing it on, all those fun things you get to deal with. The SECURE Act is now law.

Josh: So what has changed? What do people need to know now that this is the law?

Peter: Yeah. This has been a big change. So going forward now, a couple of the big changes are the age of required minimum distributions for people has changed. It used to be you had to start taking out of your retirement account the year you turned 70 1/2. It's now 72. So that's actually a greater deferral. People can wait a little bit longer before basically the IRS says, "You've got to start taking it out."

Josh: And let's just spell that out for folks. The minimum required distribution, the law says, "At a certain point," [...] it used to be 70 1/2. Now it's 72. "OK, you've been squirreling that money away. At some point, we want to get our taxes on that. You have to start taking that money out."

Josh: And there's a formula to determine how much you have to take out every year.

Peter: That's right. It's based on this joint life expectancy table for the person who is the owner of the IRA. Then there's the single life expectancy table for people who had inherited IRAs. You see, the law used to be, all the way up until this year, that if somebody inherited an IRA, with certain exceptions [...] I'm not talking about spouses or people with disabilities or somebody who's under 18. But for most other individuals, if you inherited an IRA, you had your entire life expectancy based on an actuarial table [...] hey, how long is a 23-year-old expected to live [...] where they could take out the IRA in small chunks and defer the taxation on the rest of it.

Now [...] and this is just a monumental change in financial planning and estate planning. Now except for those exception beneficiaries I was just naming, everybody else has to get the entire IRA out in 10 or less years.

Josh: Wow! OK. So there's a little change for people when they still have that asset, that their minimum required distributions start a little later. But when that asset gets passed on after their life, now the person who inherits it, based on this new law change, only has 10 years to draw the whole thing in as income?

Josh: Which means there could be a huge increase in your taxable income in those 10 years.

Josh: Which means you could pay a whole lot more in taxes, which is not withheld from your paycheck in those years, meaning you might have a whole big old tax bill to pay.

Peter: When they were arguing this or promoting the legislation, it certainly wasn't talked about as a tax increase.

Josh: Of course not.

Peter: It was, of course, talked of as closing a tax loophole.

Peter: But the reality is it raises taxes on inherited assets, which unfortunately a lot of people took a lot of things into account over a lot of years’ worth of financial plans and made decisions about, "Well, how much am I going to take out of my IRA? How am I going to pass this along to my kids? What are their tax brackets going to be?"

Peter: And so now, this 10 years, it used to be a 40-year-old would inherit an IRA from their dad who passed away, and they'd have over 40 years to take out of that IRA. And so that's really only a small percentage of the IRA each year.  And now, you have to take it all out in 10 years. There's no required minimum distribution each year. You don't have to take out 10% each year. But it all has to be out within 10 years.

Josh: So you can still use some tax planning strategies that might say, "Okay. So we're going to draw out half of it in this one year," because you're taking a leave of absence from work. So you've got no income that year. I mean, we're getting a little ridiculous here. But that's literally what tax planners and retirees and those inheritors of these assets need to be thinking about, is how this changes your fiscal picture given these timelines of change.

Peter: Yeah. That's right. And the problem with a strategy like that [...] I mean, it's great thinking if the thing comes up. But if you're waiting for that to happen and it never comes up, then all of a sudden, you hit year 10 and you go, "Oh boy. I never pulled anything out," it's all getting taxed in year 10.

Josh: And that doesn't just get taxed at whatever rate you'd normally be taxed at. It counts as income, which means it could actually push you into an entirely different tax bracket.

Josh: And again, those taxes are not being withheld anywhere so this isn't like, "OK. They've got their money and maybe I get a little back." You haven't paid a dime on any of this. If we're talking about like a $100,000 account, that could substantially impact your financial picture for years.

Josh: Wow! That is a big change, Peter.

Peter: Yeah. It really is.

Josh: OK. So that is about sort of, "I've received this. I've inherited this asset, and it changes the timeframe over which I get to take it." So that's certainly something I have to worry about after I've inherited it. Right?

Josh: What can we be doing? Is there anything folks should be doing, thinking about right now to get ahead of those changes or those potential negative impacts.

Peter: Yeah. The two big things that spring to mind are first, review the overall estate plan with your estate planning attorney. This is the type of thing that if they were doing a good job from the beginning, they were talking about these types of assets and how they were going to interplay with your desires and where you were going to pass the wealth onto. And so now they need to adjust their thinking, and that also might mean adjusting the documents that you have as your estate plan.

The second thing that people should really be exploring a lot more based on these law changes is the possibility of doing Roth conversions during their lifetime. A Roth conversion essentially is paying the taxes early on the IRAs, converting it into a Roth IRA, which is like a post-tax account. It's still a retirement account, but you've already paid the tax on.

Josh: OK. So you sort of realize those taxes in your life, sparing your descendant, your inheritor from having to pay those taxes.

Peter: Yeah. And the reason a Roth IRA is beneficial over say just withdrawing from the account is a Roth then grows tax-free, which can be very nice because during the person who [...] the actual earner, the person who put money in there [...] during their life, they've got this deal done where no tax is realized even if they pull the money out later, all the gain after it became a Roth is not taxable to them. So that's pretty nice.

But then when it goes down to the next generation, if there's anything in that Roth, they still have to pull it out within the 10 years, but when doesn't matter as much because it's all going to be not taxed.

Josh: The taxman has that paid.

Josh: And that is such an important consideration when you're thinking about which assets go where in the design of an estate plan.

Josh: If you have some charitable inclination, right, there are certain assets that would be much better sent to a charity than to your children, for example.

Peter: Yeah. And IRAs are [...] pre-tax IRAs, not the ROTHs, the traditional IRAs, that's a great thing to be leaving to charities. And one thing that is a minor change, but we talked about how the required minimum distributions have gone from 70 1/2 to 72. That also means doing direct gifts to a charity, which is called a qualified charitable distribution. That age has gone up then from 70 1/2 to 72 as well.

Josh: Ahh. All my charitable-giving plan of giving to people are going to be on top of that one. Sure. Because that's it, another way that you can avoid the tax hit from money in a traditional IRA is by giving it directly to a charity, which is again something that was brand new maybe a decade ago. Fifteen years ago now? How long ago was that? But that's another way you can avoid those taxes by using your traditional IRA to fund charitable gifts up to a certain amount. That now-eligibility just like those minimum required distributions also starts later.

Peter, thanks for helping us understand what's changing. And we'll certainly be looking to you for more advice in the future. Thanks again.

Justin did a very complete job and explained everything to us. Very professional.